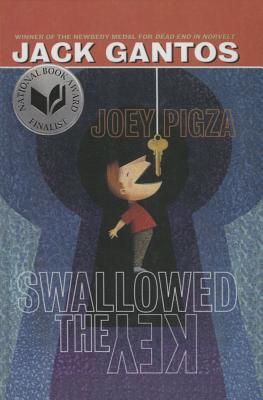 "They say I'm wired bad, or wired sad, but there's no doubt about it--I'm wired."

Joey Pigza's got heart, he's got a mom who loves him, and he's got "dud meds," which is what he calls the Ritalin pills that are supposed to even out his wild mood swings. Sometimes Joey makes bad choices. He learns the hard way that he shouldn't stick his finger in the pencil sharpener, or swallow his house key, or run with scissors. Joey ends up bouncing around a lot - and eventually he bounces himself all the way downtown, into the district special-ed program, which could be the end of the line. As Joey knows, if he keeps making bad choices, he could just fall between the cracks for good. But he is determined not to let that happen.

In this antic yet poignant new novel, Jack Gantos has perfect pitch in capturing the humor, the off-the-wall intensity, and the serious challenges that life presents to a kid dealing with hyper-activity and related disorders.

Jack Gantos has written books for people of all ages, from picture books and middle-grade fiction to novels for young adults and adults. His works include "Hole in My Life," a memoir that won the Michael L. Printz and Robert F. Sibert Honors, "Joey Pigza Swallowed the Key," a National Book Award Finalist, "Joey Pigza Loses Control," a Newbery Honor book, and "Dead End in Norvelt," winner of the Newbery Medal and the Scott O'Dell Award for Historical Fiction. Jack was raised in Norvelt, Pennsylvania, and when he was seven, his family moved to Barbados. He attended British schools, where there was much emphasis on reading and writing, and teachers made learning a lot of fun. When the family moved to south Florida, he found his new classmates uninterested in their studies, and his teachers spent most of their time disciplining students. Jack retreated to an abandoned bookmobile (three flat tires and empty of books) parked out behind the sandy ball field, and read for most of the day. The seeds for Jack's writing career were planted in sixth grade, when he read his sister's diary and decided he could write better than she could. He begged his mother for a diary and began to collect anecdotes he overheard at school, mostly from standing outside the teachers' lounge and listening to their lunchtime conversations. Later, he incorporated many of these anecdotes into stories. While in college, he and an illustrator friend, Nicole Rubel, began working on picture books. After a series of well-deserved rejections, they published their first book, "Rotten Ralph," in 1976. It was a success and the beginning of Jack's career as a professional writer. Jack continued to write children's books and began to teach courses in children's book writing and children's literature. He developed the master's degree program in children's book writing at Emerson College and the Vermont College M.F.A. program for children's book writers. He now devotes his time to writing books and educational speaking. He lives with his family in Boston, Massachusetts.

This feature require that you enable JavaScript in your browser.
END_OF_DOCUMENT_TOKEN_TO_BE_REPLACED

This feature require that you enable JavaScript in your browser.
END_OF_DOCUMENT_TOKEN_TO_BE_REPLACED

END_OF_DOCUMENT_TOKEN_TO_BE_REPLACED

This feature require that you enable JavaScript in your browser.
END_OF_DOCUMENT_TOKEN_TO_BE_REPLACED