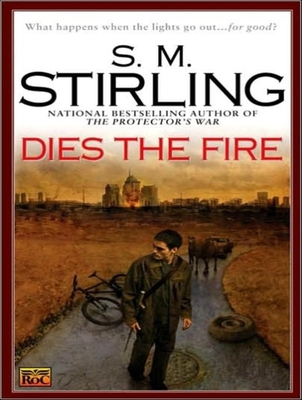 This is book number 1 in the Emberverse series.

Michael Havel was flying over Idaho en route to the holiday home of his passengers when the plane's engines inexplicably died, forcing a less than perfect landing in the wilderness. And, as Michael leads his charges to safety, he begins to realize that the engine failure was not an isolated incident. Juniper Mackenzie was singing and playing guitar in a pub when her small Oregon town was thrust into darkness. Cars refused to start. Phones were silent. And when an airliner crashed, no sirens sounded and no fire trucks arrived. Now, taking refuge in her family's cabin with her daughter and a growing circle of friends, Juniper is determined to create a farming community to benefit the survivors of this crisis. But even as people band together to help one another, others are building armies for conquest

S. M. Stirling is the author of numerous science fiction and fantasy novels, including the popular Nantucket series that began with "Island in the Sea of Time."

Former radio broadcaster Todd McLaren has been heard on more than 5,000 TV and radio commercials; narrations for documentaries on such networks as A&E and the History Channel; and films. His book narrations have earned him a prestigious Audie Award as well as a "Publishers Weekly" Listen-Up Award.

This feature require that you enable JavaScript in your browser.
END_OF_DOCUMENT_TOKEN_TO_BE_REPLACED

This feature require that you enable JavaScript in your browser.
END_OF_DOCUMENT_TOKEN_TO_BE_REPLACED

END_OF_DOCUMENT_TOKEN_TO_BE_REPLACED

This feature require that you enable JavaScript in your browser.
END_OF_DOCUMENT_TOKEN_TO_BE_REPLACED