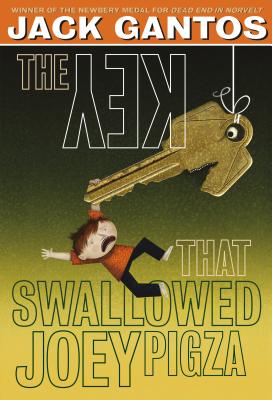 This is book number 5 in the Joey Pigza series.

The fifth and final book in the groundbreaking Joey Pigza series brings the beloved chronicle of this wired, wacky, and wonderful boy to a crescendo of chaos and craziness, as everything goes topsy-turvy for Joey just as he starts to get his feet on the ground. With his dad MIA in the wake of appearance-altering plastic surgery, Joey must give up school to look after his new baby brother and fill in for his mom, who hospitalizes herself to deal with a bad case of postpartum blues. As his challenges mount, Joey discovers a key that could unlock the secrets to his father's whereabouts, a mystery that must be solved before Joey can even hope that his broken family might somehow come back together—if only it doesn't pull him apart first.

This title has Common Core connections.

“Even kids whose own experience is more orthodox will recognize that this conclusion counts as success for the Pigzas and a triumphant coming into his own for Joey, the boy whose unstoppable energy has become a force for good. Fans who've followed Joey's chronicles will regret the series' ending, but the inimitable Joey will live on indelibly in memory and in new generations reading.” —BCCB

“*Readers of all ages are going to cheer Joey on as he heroically deals with one over-the-top situation after another. By the time this final book of the series - as elegantly and propulsively written as the others - draws to a close, you know that no matter what the future holds, Joey's inner strength and smart, sweet nature will prevail.” —The Horn Book, STARRED REVIEW

“*Readers who have read the previous books and come to know and love Joey will appreciate the irony and emotional punch of his final triumph. Give this groundbreaking, heartbreaking title to readers mature and sensitive enough to understand the author's black humor and seriousness.” —School Library Journal, STARRED REVIEW

“* The fifth and (ostensibly) final book in the multi-award-winning Joey Pigza chronicle features all of the drama, havoc, and heart readers have come to expect, dread, and love . . . The conclusion to Gantos' beloved and much-lauded series is big news, and Joey's fans of all ages will want to grab their copies as soon as possible.” —Booklist, STARRED REVIEW

“* Collectively, the Pigza series is a poignant examination of modern dysfunction, a window into how kids in tough family situations come to believe they are damaged and incapable of redemption.” —Publishers Weekly, STARRED REVIEW

This feature require that you enable JavaScript in your browser.
END_OF_DOCUMENT_TOKEN_TO_BE_REPLACED

This feature require that you enable JavaScript in your browser.
END_OF_DOCUMENT_TOKEN_TO_BE_REPLACED

END_OF_DOCUMENT_TOKEN_TO_BE_REPLACED

This feature require that you enable JavaScript in your browser.
END_OF_DOCUMENT_TOKEN_TO_BE_REPLACED