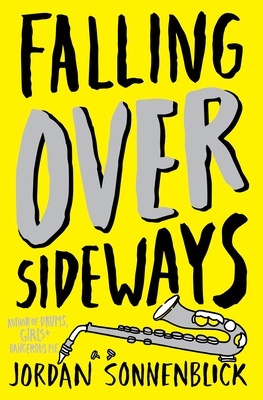 A new hilarious, honest, and hopeful novel from the author of Drums, Girls, and Dangerous Pie
It's not easy being Claire. (Really.)

Claire's life is a joke . . . but she's not laughing. While her friends seem to be leaping forward, she's dancing in the same place. The mean girls at school are living up to their mean name, and there's a boy, Ryder, who's just as bad, if not worse. And at home, nobody's really listening to her -- if anything, they seem to be more in on the joke than she is.

Then into all of this (not-very-funny-to-Claire) comedy comes something intense and tragic -- while her dad is talking to her at the kitchen table, he falls over with a medical emergency. Suddenly the joke has become very serious -- and the only way Claire, her family, and her friends are going to get through it is if they can find a way to make it funny again.

Jordan Sonnenblick is the author of the acclaimed Drums, Girls & Dangerous Pie, After Ever After, Notes from the Midnight Driver, Zen and the Art of Faking It, Falling Over Sideways, and The Secret Sheriff of Sixth Grade. He lives in Bethlehem, Pennsylvania, with his wife and two children.

"A brave book . . . Jordan Sonnenblick carries it off with such charm and elan, you forget for a moment your heart is breaking." -- Frank McCourt, author of Angela's Ashes

* "Sonnenblick shows that even in the midst of tragedy, life goes on, love can flower, and the one thing you can always change is yourself." -- Booklist, starred review

"The reader falls in love with the brothers, laughing and crying by turns and rooting for both of them until it almost hurts." -- Kirkus Reviews

Praise for After Ever After:

* "As hilarious as it is tragic, and as honest as it is hopeful, don't confuse this book with inspirational reading. It's irresistible reading." -- Booklist, starred review

"Told with Sonnenblick's trademark self-deprecating humor, this stand-alone tween narrative slots neatly into the space between the author's YA and J titles, sensitively dealing with issues of family, friendship and death in a way that will appeal to middle-grade students. Recommended for fans and new readers alike." -- Kirkus Reviews

This feature require that you enable JavaScript in your browser.
END_OF_DOCUMENT_TOKEN_TO_BE_REPLACED

This feature require that you enable JavaScript in your browser.
END_OF_DOCUMENT_TOKEN_TO_BE_REPLACED

END_OF_DOCUMENT_TOKEN_TO_BE_REPLACED

This feature require that you enable JavaScript in your browser.
END_OF_DOCUMENT_TOKEN_TO_BE_REPLACED