What Would Joey Do? (Joey Pigza #3) (Hardcover) 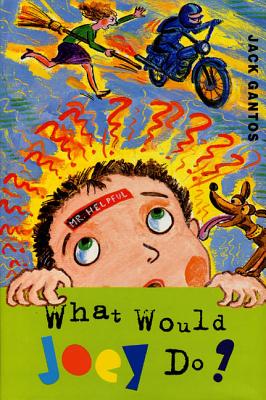 This is book number 3 in the Joey Pigza series.

Are they flirting or fighting? This is Joey Pigza's question when the fireworks suddenly start to explode between his long-separated mom and dad, whom he's never really had a chance to see together. The more out of control his parents get, the less in control Joey feels and the more he wants to help make things better. But Joey's ailing tell-it-like-it-is grandmother wants her grandson to see it like it is with his unpredictable parents. Knowing that she is fading fast, she needs Joey to hurry up and show that he can break the Pigza family mold by making a friend in the outside world. The only potential candidate, however, is Olivia Lapp -- Joey's blind homeschooling partner, who brags that she is "blind as a brat" and acts meaner to Joey the more desperate he gets for her friendship -- even if Joey senses there's more to her than meets the eye.

In this dazzling episode, Jack Gantos's acclaimed hyperactive hero discovers that settling down isn't good for anything if he can't find a way to stop the people he cares about from winding him up all over again.

What Would Joey Do? is a 2003 Bank Street - Best Children's Book of the Year.

“Joey isn't leading the easiest of lives, but he's a tough and triumphant kid with an absorbing story.” —Starred, The Bulletin of the Center for Children's Books

“In Joey Pigza, Mr. Gantos has meticulously crafted the voice of a troubled kid with a solid center of goodness. Joey tells his own story, and it reads like a ride in a car without brakes.” —Sue Corbett, Knight Ridder News Service

“Joey emerges as a sympathetic hero, and his heart of gold never loses its shine.” —Starred, Publishers Weekly

“Readers will cheer for Joey, and for the champion in each of us.” —Starred, School Library Journal

This feature require that you enable JavaScript in your browser.
END_OF_DOCUMENT_TOKEN_TO_BE_REPLACED

This feature require that you enable JavaScript in your browser.
END_OF_DOCUMENT_TOKEN_TO_BE_REPLACED

END_OF_DOCUMENT_TOKEN_TO_BE_REPLACED

This feature require that you enable JavaScript in your browser.
END_OF_DOCUMENT_TOKEN_TO_BE_REPLACED